Three pupils from Y6 represented St. Mary’s on Remembrance Sunday by attending the town’s service at St. Mary’s Parish Church and then marching to the War Memorial with other schools, youth groups, armed services representatives and dignitaries.  There were many other pupils from St. Mary’s present as part of the local  Brownie, Guide, Cub and Scout groups in attendance.  It was a very moving and special service to mark not only Remembrance Sunday, but also the centenary of the end of the First World War.

Pupils from Year 5 and Year 6 have been marking Remembrance by finding out about those men and women from Swanage who have made the ultimate sacrifice for our country.  They have created some rather special poppy wreaths that included the name and age of each of the ninety-nine men from Swanage who died in the First and Second World Wars.  Year 6 have also written prayers for remembrance and peace on the back of poppies.  The wreaths and prayers are on display in St. Mary’s Church. 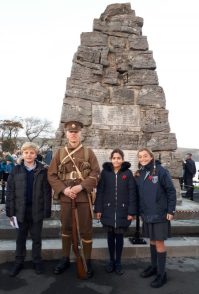