A massive congratulations to all the Year 5 and 6 pupils who were involved in the Purbeck and Christchurch finals of Indoor Athletics. St Mary’s won the event for the first time, defeating some much larger primary schools from East Dorset. This was a testament to the hard work and dedication shown by the children, who have been practising long and hard, as well as the dedication of Mr White. 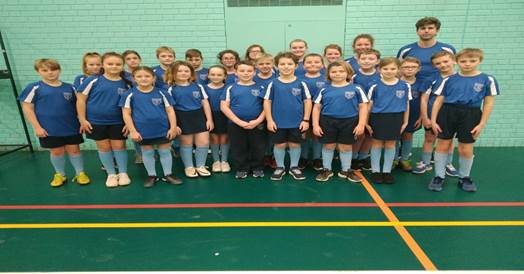 Also a big well done to the handball team who won all seven matches to qualify for the Dorset School Handball final to be held at a later date. They played with excellent teamwork and had some good performances beating St Mark’s 7-1 as well as Stoborough 5-2. This was a mixed event with five players on the court at one time.  The basic rules of handball are you must pass or bounce the ball within three strides and shoot outside of a D.

Congratulations to all the runners who took part in the Shore Runners event during sunny Swanage Carnival 2019 (that seems a long way off, now!) and congratulations on winning the Carnival Cup. Thank you to the members of the Carnival Committee who visited St Mary’s to make the presentation.

On 22 November a team of  12 very enthusiastic Year 1 and 2 children took part in a gymnastics session at the Swanage School and had a great time. Thanks to Hannah from Swanage Gymnastics Club and Mr Lewis from The Swanage School for giving us this opportunity.

Congratulations to the year 4 & 5 boys team on securing second place in the Purbeck Pyramid football competition.

It’s all in the past…